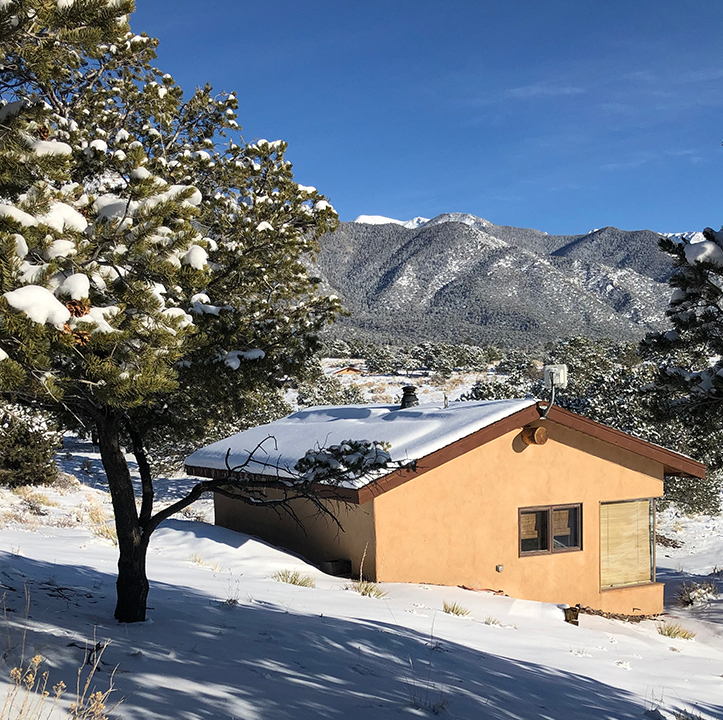 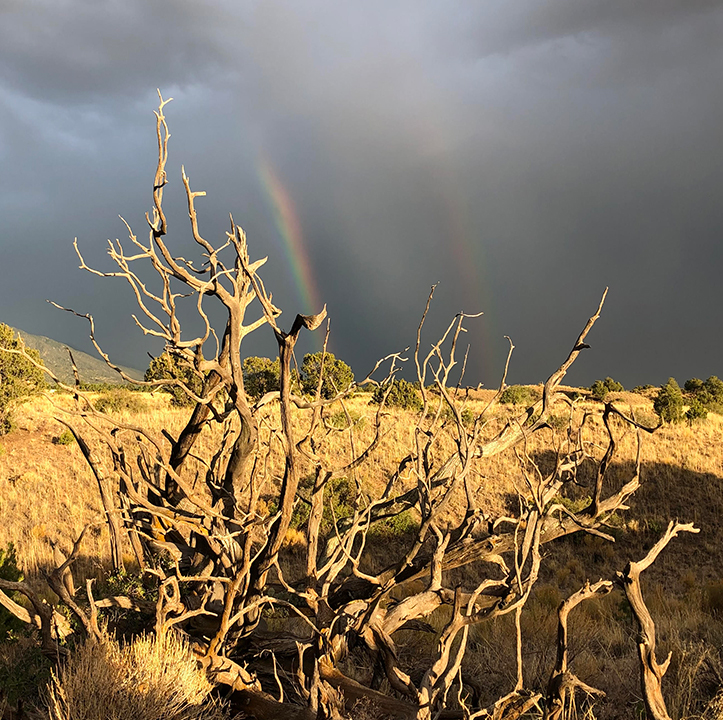 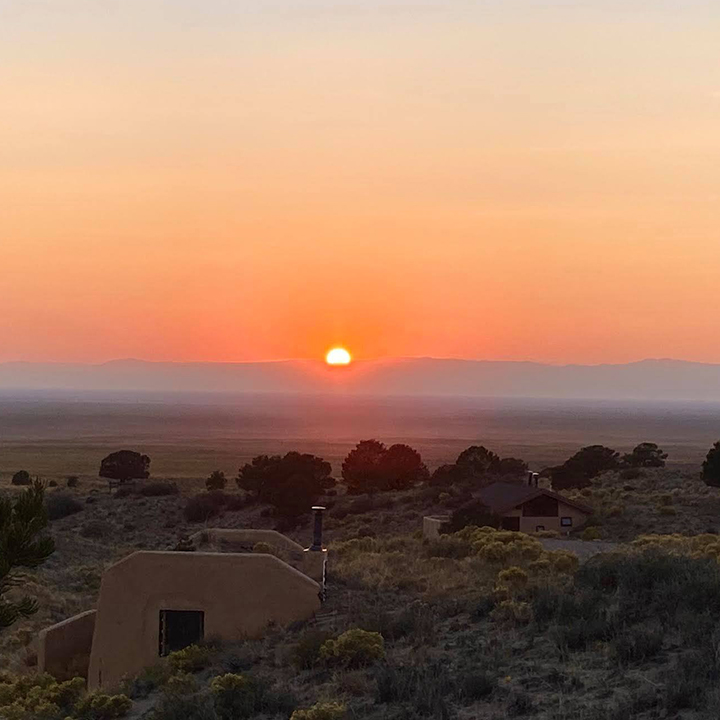 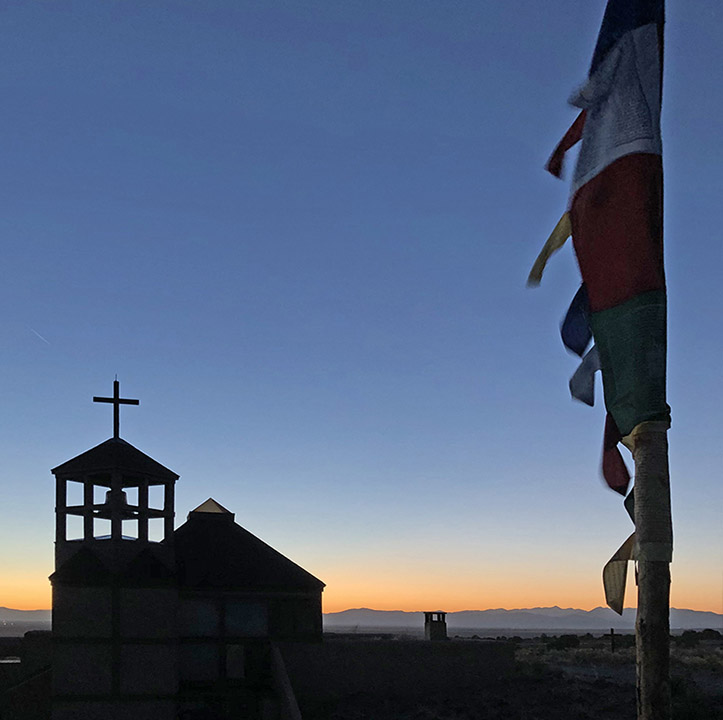 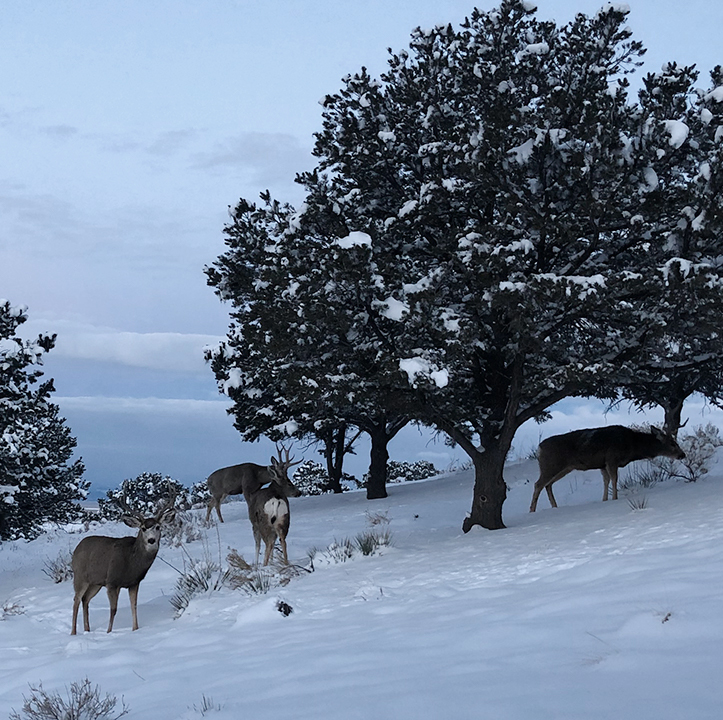 Contemplatives of all traditions have long sought out natural places of great beauty. Miyo Samten Ling, or the “Hermitage of Unwavering Samadhi,” rests on 110 acres of ancient sacred land near the town of Crestone, Colorado, nestled beneath the soaring peaks of the Sangre de Cristo mountain range, and hovering at the edge of a vast high-altitude desert, the San Luis Valley. The landscape is adorned with piñon pines and miniature flowering cacti, and is home to elk, deer, black bears, rabbits, coyotes, and many species of birds in their natural habitat. 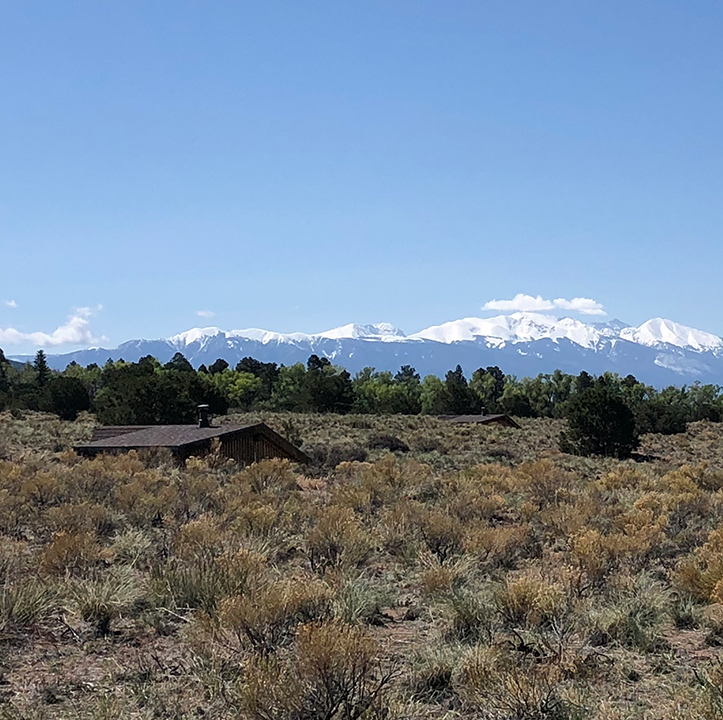 With gratitude and honor, we are aware that we occupy the ancestral land of the Hopi people, who understand themselves to have emerged into the current Fourth World from the Sipapu, or “place of origins,” which is about 25 miles south of Crestone, beneath the San Luis Lakes, just west of Mount Blanca. Blanca, known to the Navajo as Sisnaajini (Dawn or White Shell Mountain), is, for many indigenous peoples, the sacred mountain of the East, the place where, according to the Hopi, “light comes into the world” (Hopaqw Tukawi).

The San Luis Valley as a whole is considered to be the spiritual and geographical center of Turtle Island, which includes the whole of North and Central America. Many tribes came here for hunting and sacred solitude: Hopis, Navajos, Comanches, Apaches, Kiowa, and Lakotas. The Utes created settlements on the valley floor, though, prior to global warming, the fiercely cold winters meant that no indigenous peoples would live here year round. Young people were taken to ledges in the higher reaches of the 14,000 foot mountains above us to be tested in their vision quests. Shamans came to this land to partake of its power, and many people experienced spontaneous healing. It is believed that many spirit protectors continue to occupy these mountains to this day. Elders among the Kogi and Inca peoples of Columbia and Peru have long since traveled here as a place of pilgrimage. 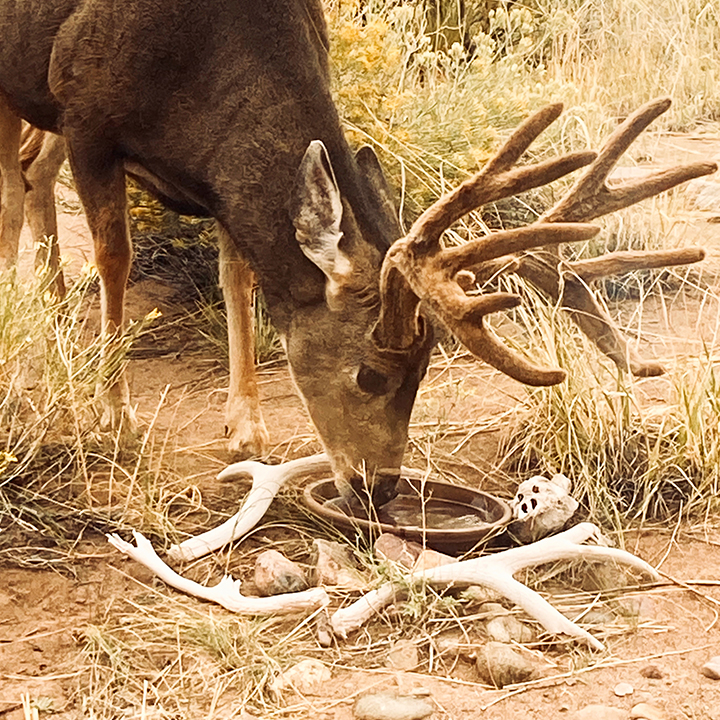 The Navajo called this “The Bloodless Valley,” for here many tribes engaged in trading and ceremony, but never shed blood. We honor the indigenous peoples—past, present, and future—who revere this exquisite, holy land upon which the Center for Contemplative Research at Miyo Samten Ling is now located. We are committed to a nurturing and nonviolent relationship with this precious land, its First Peoples, and all the animals who dwell here. We rejoice in the initiatives of the Manitou Foundation, including the Thunderbird Lodge—House of Original Thought, which “will serve as a ceremonial gathering place for indigenous people to take the lead role in addressing and finding solutions on issues impacting indigenous communities worldwide.” The many spiritual centers of Crestone, including the Hermitage that is now Miyo Samten Ling, came into being thanks to the generous land grants made by Hanne and Maurice Strong, founders of the Manitou Foundation, since the early 1980’s. 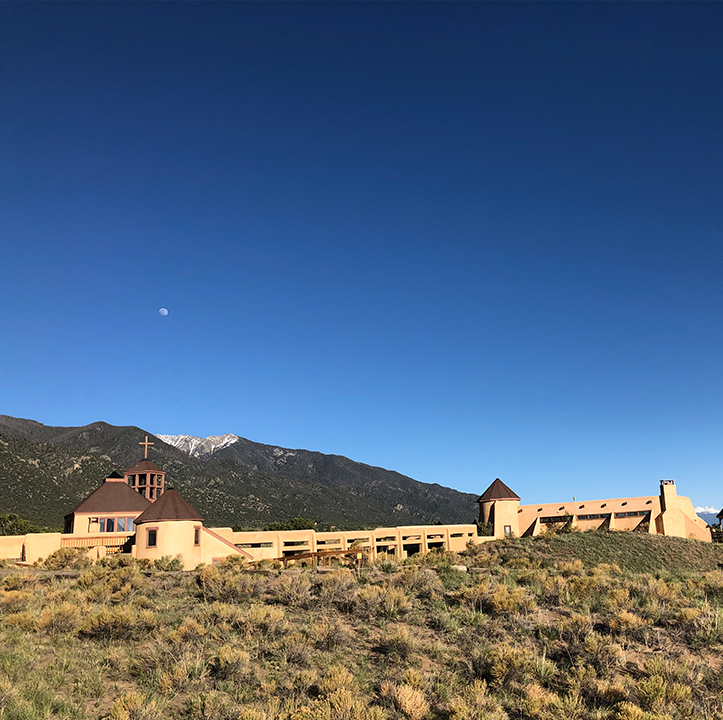 We also give thanks to our immediate predecessors on this land, the members of the Spiritual Life Institute at Nada Carmelite Hermitage, the Roman Catholic contemplative community who built, prayed, and lived on this land for thirty-eight years, hosting innumerable retreatants from around the world. The Nada community created a beautiful environment and dwellings that are deeply conducive to our current intensive practice here. 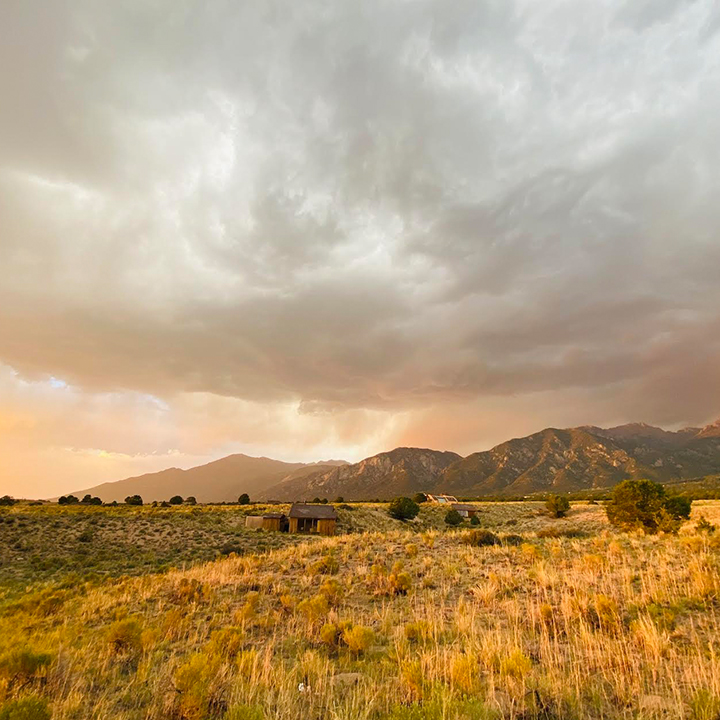 Miyo Samten Ling provides an optimal setting for highly-qualified individuals to devote themselves full-time for months or years to meditative practice under the direction of B. Alan Wallace and other qualified instructors. Our first group of carefully selected retreatants began long-term retreat in November 2020.

There are currently eleven cabins in good condition for retreat, while we plan to fully renovate two or three more of the oldest cabins on the land next year. Eventually, we aspire to build twenty-one additional cabins, nestled across the many rolling hills of the hermitage land. 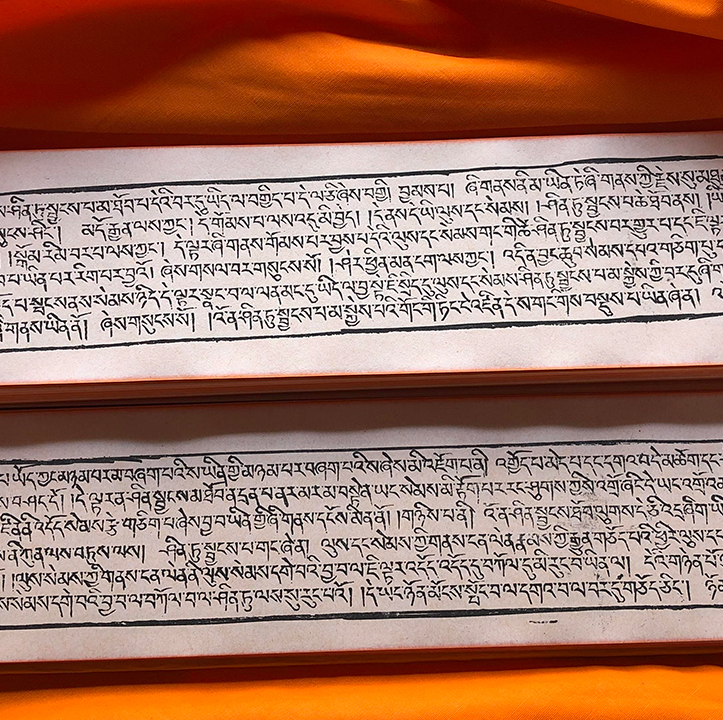 The name Miyo Samten Ling was granted to the vision for the first Center for Contemplative Research by His Holiness the Dalai Lama. Samten Ling was the name of one of the temples of the original Samyé Monastery in Tibet, built in the 8th Century under the protection and guidance of Guru Padmasambhava.

While full-time contemplatives at Miyo Samten Ling draw on diverse personal religious backgrounds—including Christian, Jewish, Muslim, Hindu, and Buddhist—at present all are deeply immersed in the study of the view, meditation, and way of life of Dzogchen, or the Great Perfection tradition of Tibet. Thus, Miyo Samten Ling is a Hermitage grounded in reverence for and devotion to tradition, while soaring to the skies in openness to diversity and cross-cultural influence in various forms.